LISTEN TO THE FIRST 5 MINUTES OF “THE BIG BLEEP: THE MYSTERY OF A DIFFERENT UNIVERSE”!

“Just a politicians abuse the trust of their constituents to gain personal power and wealth, rather than to serve their electorate,  so does the myopic mind consider that wisdom or wealth might be had from a magic potion!  Indeed, the mythical Fountain of Youth could never be discovered by an explorer in the New World at the cost of murdering countless native inhabitants.  The proverbial ‘eye of the needle’ does not admit the soul of a wealthy or brutal man into Nirvana.

As with many other alchemists before me, I have conducted a continuing series of careful observations upon the effects of a vast variety of chemical combinations.  The purpose of these is to discover and perfect a solution which can be ingested or injected into the human body to enhance the ability to perceive, understand and operate at an elevated level, both physically and spiritually — the latter being of senior importance to the former.

Originally, I was introduced to the notion that chemical alteration of the human system might alter or enhance the ordinary state of awareness or ability, through my study of chemistry, or more correctly, alchemy.  Many a sage has dabbled seriously with attempts to transmute the soul of man to a more profound understanding of life through chemical manipulation.  No less a personage than Sir Isaac Newton himself, as Mr. Dodgson observed during our first visit, spent a considerable number of years in this quest.  What results he may have obtained are not known, although it goes without saying that the scientific accomplishments of the great man are virtually unparalleled in human history!

Is it not probable that his mental acuity, or indeed his phenomenal genius, could have been augmented by his experimentations in alchemy? Reportedly, the man invested a prodigious number of years into this science, yet never shared his findings with anyone.  For what purposes did he study alchemy, and for what reasons did he conceal his findings?

How is it that a single man can innovate and revolutionize so many fundamental understandings of nature and of the spirit within a single lifetime?  Arguably, his intelligence exceeded those of any other living man, before or since.  It is my own observation that the spiritual world permeates all that is material.  It is this spiritual essence from which intelligence, and life itself, is empowered.

There is nothing mystical or fanciful in this subject whatever.  It is a fact of simple observation, which is easily proven to even the dimmest mind.

To wit: when an organism is killed or dies of natural causes, is it not the absence of an unseen force of animation that causes the transition from life to death?  Conversely, when a life form is borne it is the animation of the physical form by the non-physical force that we call life.

Anyone who has witnessed the death of a human body — as I have many times during my career as a criminal investigator — or who has attended the birth of a child or animal, cannot deny the phenomenon of that transition from inanimate object, into a living, breathing, self-motivating life form.

My personal quest for a spiritual elixir consumed many hours over many years. I did not concern myself with the possibility of negative consequences from my experiments.  The reward of success, for me, far outweighed the risk of deleterious effects upon my own person or mental state.  I suspect that Sir Isaac Newton shared my own insatiable passion for this science.

My own methods are always meticulous and thorough.  My observations upon the behavior of various chemical concoctions upon my own state, whether positive or negative, are equally meticulous.  With each self-administered dose I gained a more certain knowledge of the effects upon my own perception, ability, and understandings of life, and the universe.

To say that I had already succeeded in transcending the commonplace life of the “normal” citizens of Earth would be a gross understatement.  However, all states of existence can only be measured relative to similar states.  To this degree I deemed that a few of my experiments proved vastly more successful than others.  It was these upon which I focused my entire scientific attention in order that I might refine and improve upon them.  In my inmost heart I believed I could succeed where others failed.  Now that I found myself overwhelmed by this bizarre set of circumstances I had a new opportunity to test myself.

As a general rule I discovered that the effect of any chemical upon the human body serves only one, singular purpose:  to drive out or release the spirit from the body.  The spirit, the soul, the invisible animating essence of all life forms, is the true source of intelligence, awareness, ability and volition.  Indeed, life is not possible in the absence of it!

When driven or released from the constraints of a frail, tiny biological organism, such as the human body, I have observed that I, as a spiritual essence, can travel, perceive, understand and transcend the state of relative misery I experience when confined inside a body.

I frequently float about the room for hours, observing the microcosmic  minutia of every object within the room.  Likewise, I have, occasionally, traversed across half of the planet!  Lingering upon the towering peaks of storm blown mountains, floating across the burning desert sands — perceiving the intense heat without injury or discomfort — or quietly absorbing the moistness of moss upon the bark of magnificent redwood trees in the rugged Northwest.

This, I am certain, has been the prize sought by so many masters of mathematics, alchemy, philosophy and mysticism who have trod upon this lonely path.  The transmutation of base metals into precious metals has never been the goal of an accomplished alchemist!  What is mere gold compared to this?  What Earthly price can be placed upon the value of the soul?  What is a lifetime or two or twelve thousand spent in human pain, grief, disappointment and death, when compared to the possibility of a transcendent state of ability and awareness?

Indeed, so far as my experiments have revealed to me, there is no greater prize than realizing the full potential of subjective experience as a living spirit.  Unfortunately, the chemical syringe has been my only gateway through the portal of time, space and perception which lies between painful reality of the body, and the joy of freedom from it.  My personal adventure — the adventure of adventures,  the investigation of the highest order – has been to discover a safe and permanent transition between the reality of the flesh and the immortality of the soul.”

— Excerpt from Chapter 11 – Alchemical Solutions – from the book SHERLOCK HOLMES: MY LIFE, by Lawrence R. Spencer.

NOW AVAILABLE AS AN AUDIOBOOK!

This is the audiobook of the original Alien Interview, INCLUDING Footnotes. Find out how you can download the book FREE! 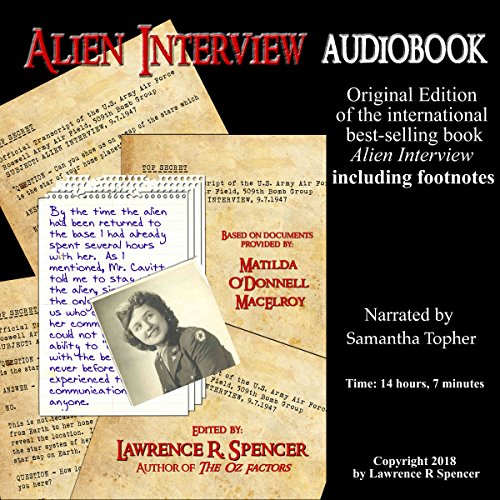