This is a classic and revolutionary book, written in 1970 by John Alva Keel, (March 25, 1930 – July 3, 2009) an American journalist and influential UFOlogist who is best known as author of The Mothman Prophecies.  (Source:  http://en.wikipedia.org/wiki/John_Keel )  His research seems to verify much of the information published in the book ALIEN INTERVIEW.   The following excerpts are taken from the final chapter of the book, “Operation Trojan Horse“.   May our point of view about “aliens” never again be what Hollywood imagines it to be….

A “MUST READ” FOR HALLOWEEN…..

This book is dedicated to all living beings who expect to die sometime and to all of the dead people who ever lived who may still be living somewhere, sometime, somehow. This book is also dedicated to all of the people who are living that may need some ideas about what to do with themselves after they die. Finally, this book is dedicated to all the people who will soon be living by virtue of one or more of the following circumstances: birth, rebirth, resurrection, reincarnation, transconfiguration, cryogenic resuscitation, invasion of alien beings, angels falling out of grace, an act of one or more gods, transformation or transmigration, arrival from a different time / space / universe / plane of existence, unimaginable others, Whoever you were, are, or will be, I trust that you will enjoy the “Rest of Eternity”.   — Lawrence R. Spencer 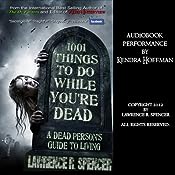 Listen to the AUDIOBOOK  — Narrated by Kendra Hoffman

Spiritualism: In Search of Proof of Spirits
During the rise of spiritualism in the mid-1800s and into the early twentieth century, there were mediums who claimed they could speak to the dead and bring forth oddities from the other side of the grave. There were also photographers who produced intriguing psychic photographs of the deceased who were appearing beside loved ones. Arguments ensued about whether or not these paranormal claims were true. Arthur Conan Doyle found that a group of mediums called the “Crew Circle” and one of its members in particular, psychic-medium Billy Hope, had come under strong attack by now legendary ghost investigator, Harry Price, of the Society for Psychical Research. Price was claiming Mr. Hope had switched photographic plates during Price’s investigation of him. Doyle elected to defend Mr. Hope and “maligned members of the Crewe Circle” by publishing evidence in support of the ghost photographs being produced by the group.

Doyle the Spiritualist
Arthur Conan Doyle was a spiritualist who believed that ghosts and spirits could be contacted by use of a psychic-medium. To prove this idea to others, he elected to personally investigate the production of ghost pictures from mediums who were adept at creating this phenomena. His findings were published in 1923 in a book entitled, The Case for Spirit Photography. As of this writing, copies of his book can fetch between $150-300, depending upon condition.

In The Case for Spirit Photography, Arthur Conan Doyle explains his intentions to defend the Crewe Circle, Medium Billy Hope and spirit photography:

“I hope to make it clear to any unprejudiced mind that there is overwhelming evidence that we have in Mr. Hope, a man endowed with most singular powers, and that, instead of persecuting and misrepresenting him, it would be wiser if we took a sympathetic view of his remarkable work, which has brought consolation to the afflicted, and conviction to many who had lost all belief in the independent life of the spirit.”

Mr. Hope, following on the heels of famed spirit photographer, William Mumler, at the time of Doyle’s investigation, had been producing ghosts in photos for 17 years. He had been tested by the experts of his day who were proficient in photography, science, and investigative journalism. Arthur Conan Doyle tested Mr. Hope and his ghost picture process by purchasing, opening, marking, and inserting his own photographic plates into Hope’s camera. After medium Hope took a picture with the plates, Doyle removed them, developed, and fixed them himself. The pictures would reveal a smoky presence Arthur Conan Doyle called “ectoplasm” – evidence of spirit presence.

Sir Arthur Conan Doyle continues detailing other experiments involving Mr. Hope and the Crewe Circle, including the examination of their character. By the end of the book, we read numerous personal testimonies corroborating Doyle’s conclusions. The testimony of George H. Lethem, at the time serving as Justice of the Peace for the City of Glasgow, was highly credible. Lethem also examined the entire process of the Crewe Circle members and came to the following conclusions about their photographs:

Mr. Hope was never proven a fraud. His process went with him when he left this earth in 1933. Doyle’s book survives today as a positive testimony of Hope’s legacy. The debate about the validity of ghost and spirit photographs still continues to be waged, today, by both skeptics and believers.

After viewing the ghost pictures and evidence that Arthur Conan Doyle puts forth in his book, do you believe he has proven the case for spirit photography? Were the photos just hoaxes or were they real evidence produced by members of the Crewe Circle? You decide…

In spite of vast numbers of “ghost sightings”, innumerable reports of “out-of-body experiences”, and “divine encounters” with gods or spirits, that pervades nearly all of prehistoric and recorded human history, I found only one underlying, unifying, indisputable, axiomatic common denominator that permeates all of this data:

Assuming that subjective reality, or beliefs, of individuals is acceptable evidence, there has been no universally agreed upon “proof” that “spirits” or gods or life-after-death based on physical evidence, circumstantial or subjective data.  There are several deductions I can infer from the lack of physical evidence that such things are real, and, if verified, may lead to a workable solution to many of the “mysteries” of Life, Universes and Other Stuff“:

deduction:
In spite of an enormous collection of subjective, circumstantial “evidence” of spiritual activity on and around Earth, the existence, intentions and the activities of spirits remain hidden and mysterious.

deduction:
Universally agreed upon proof of the existence of spirituality, based on subjective data, physical and circumstantial evidence are subject to conflicting vested interests, which has made such proof unattainable.

Collectively, these deductions beg the obvious question:
If spirits exist, why is there no “proof”?   The answer seems to be fairly obvious, at least to me:  Perceptions of spirituality are a subjective reality, unique and different for every individual.  Subjective reality does not require evidence or “proof”.  The proof is within you.

“The English word spirit (from Latin spiritus “breath“) has many differing meanings and connotations, most of them relating to a non-corporeal substance contrasted with the material body. The word spirit is often used metaphysically to refer to the consciousness or personality. The notions of a person’s spirit and soul often also overlap, as both contrast with body and both are understood as surviving the bodily death in religion and occultism, and “spirit” can also have the sense of “ghost“, i.e. a manifestation of the spirit of a deceased person.

Definitions from TheFreeDictionary.com and Wikipedia.org