“In a 1987 study, Dr. Nancy Andreason of the University of Iowa found that a sample of creative writers had significantly higher levels of bipolar disorder than a control group of similar intelligence levels.”

My personal observation of is that the QUACKS who call themselves “doctors of western  psychological medicine” do not have ANY CLUE about the spiritual nature of human beings and life forms in general.  They are so simple-minded and psychically crippled that they think the ONLY UNIVERSE is the physical universe.  They actually think that YOU are a BODY and that YOUR THOUGHTS are coming from a ten pound PIECE OF MEAT called a brain!  The simple truth that humans are spiritual beings, who animate the physical form of a body, has been demonstrated a hundred billion times throughout thousands to generations!  When a human dies, the spiritual being departs from the body!  If you aren’t aware of this phenomenon, please get yourself educated.  Just GOOGLE “Reincarnation” and “Out-of-Body-Experience”.  Read a few of the hundreds of  books about these subjects written by people who are not  “medical scientists” — the self-appointed priests of the physical universe.

Artists are the empathetic makers of aesthetic realities: love, passion, truth, justice, honesty and equanimity are the domain of the artist and the spiritual being.  How can an artist endure existence in a universe made only of cold, brutal forces — devoid of compassion and spirit — without being “insane”?   If artists are “insane”, then I am proud and privileged to be considered one of them!   — Lawrence R. Spencer. 2012

The word “psychology” means, literally:  Psyche (The Spirit or Soul) + -ology  (the study of).  However, the so-called “science” of psychiatry is nothing whatsoever to do with Spirits or Souls.  Instead it is a mind control operation funded primarily by governments, as developed, originally, by Nazi medical doctors working to exterminate the “undesirables” of human populations.

Here is a wonderful article about the current “thinking” and “innovation” of the “Priests of Modern Mental Science”.  The Lords of Government Mind Control are working VERY hard to invent more new ways to confuse, befuddle and submerge our Immortal Spiritual Selves in a morass of mind-control double-speak, total bullshit, psychiatric chemicals and outright fantasy they pass off on the human population as “scientific fact”.  These are the very beings that George Orwell warned us about in the book 1984.  And, the very same “prison guards” described in the military transcripts published in the book Alien Interview.

These maniacs are behind every single school yard shooting massacre, every war, and every covert operation being run by every secret service activity on planet Earth.   This report illustrates the mind-boggling nonsense of the “science of psychobabble”.  Beware and avoid.

“What Are They Doing?  My Visit to a Psychology Conference 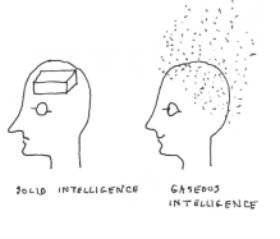 Terror
For me, the highlight of the convention was a lecture—a prestigious “invited presentation”—by Jeff Greenberg of the University of Arizona. The topic was “Managing the Terror of Being Human: Theory and Research”. The man knows his subject cold, as you can see from this description he wrote in the convention guidebook:

Biography
My terror began in the Bronx in 1954. It was amplified by my undergraduate experience at Penn and my graduate training at SMU and the University of Kansas. It has continued to grow over my 15 years at the University of Arizona.

Ignore the Face
I also enjoyed a lecture by Joseph J. Campos of the University of California at Berkeley. Campos raised the question, “Does the Face Really ‘Express’ Emotions?” His answer was a ringing No, “except under very special conditions.”

Fluid Meaning
I accidentally touched off a minor incident the day after Georgia Tech professor Randy Engle gave a presentation on the topic “Working Memory Capacity, Controlled Attention and General Fluid Intelligence”. I asked nine experienced psychology professors to define the phrase “general fluid intelligence”. None of them could, although one did opine that “the lecturer probably knows what it means.”

Poster Sessions: Smells, Oils, a Princess, and Hair
Although there were many stimulating lectures, the most exciting action was in the poster sessions. In case you’ve never been to a poster session, I should explain the general idea. Dozens of student teams, and the occasional professor, each hung up a poster describing 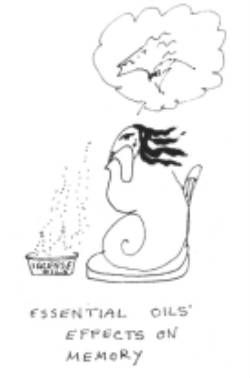 their recent projects. In each session, you can stroll the aisles and see anywhere from 20 to 50 or more posters.

The first poster session, held on Thursday at 9:00 a.m., celebrated the general themes “Human Learning, Memory, and Cognition.” I was especially roused by three special posters: “Effects of Pleasant Ambient Odor on Memory Recall;” “Flash-bulb Memories for the Death of Princess Diana;” and “Essential Oils’ Effects on Memory.”

An 11:00 a.m. poster session concerned “Applied Psychology.” One poster discoursed on “The Effects of Odor and Stress on Mood.” Another, more abstruse, was entitled “Perceived Age of Teenage Females: Effect of Complexion, Makeup, Hairstyle, and Apparel.” I found it provocative.

A 1:00 p.m. poster session delved into “Social Issues”, and featured a gem of a poster called “The Influence of Male Facial Hair on Perceptions of Age.” It, too, must be described as provocative. 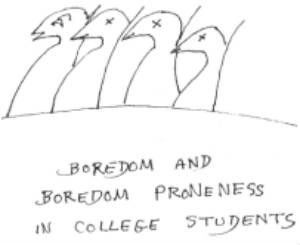 Boredom
The convention was a multi-ring circus, with more simultaneous wonders than any one person could take in. Also at 1:00, but down the hall from the poster session, Mary B. Harris and Keith Zvoch of the University of New Mexico presented their paper on “Boredom and Boredom Proneness in College Students.” Some members of the audience found it stimulating.

More Smells, Parking, and Arousal
Friday morning was lovely in Albuquerque, with pink and blue skies, comfy temperatures, and psychologists in every nook and cranny. The 10:00 poster session was all about “Brain Function and Sensory Process.” There was an impressively worded poster entitled “Anterior EEG Asymmetry and Odor Hedonics: Gender Effects”. Not far away, an anxious crowd perused a poster called “Human Foraging Strategies: Outcomes for Campus Parking.” A knot of students pored intently over a poster called “Arousal, Sleep, and Time Perspective in University Students.” Sadly, only a few of them even glanced at the poster with the most intriguing title: “Can a Rat Who Has Never Known Water Know Thirst?” 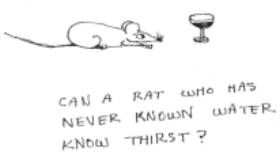 The noon hour also featured another prestigious “invited presentation” in the main ballroom. Roger S. Ulrich of Texas A&M University described his research on patients in surgical recovery rooms. As the patients emerge from their anesthetic haze, Ulrich shows them big color photographs of the great outdoors. If I understood him correctly, Ulrich said that this “improves health outcomes,” and that therefore his is actively marketing his services to hospitals and clinics.

At 1:20 in the same ballroom, the editor of the Annals of Improbable Research delivered another of the convention’s “invited presentations.” The topic was “Improbable Research and the Ig Nobel Prizes.” Curiously this was the only session in four days in which I saw people laughing. It began at 1:20 rather than 1:00 on the dot because the previous lecturer, Roger S. Ulrich, wouldn’t stop talking about how hospitals should buy his nature photos.

Punching, Dolls, and Car Characters
The Friday 1:00 poster session treated us to research on the following topics: “Boxer and Spectators: Perceptions and Characteristics of Pugilism”; “Body Satisfaction in Relation to Media Exposure, Self-Monitoring, and Barbie Doll Ownership”; “Effects of Descriptive Norms and Self-Awareness on Littering”; and my favorite of the day, “Car Color: An Indicator of Driver Personality.” 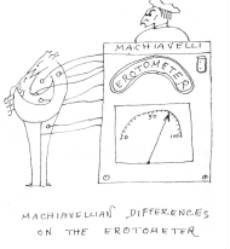 And the 10:00 session was, if anything, even better. Its overall topic, “Stress and Coping”, was highlighted by two posters. The first, entitled “Sleep Quality and Anxiety Affect Distress Scores Measured During Finals”, was of special interest to students. The other, “Health Effects of the Interruption of an Emotional Writing Paradigm”, was of special interest to anyone who wanted to know what an Emotional Writing Paradigm is.

The noontime poster session dealt with “Education Psychology.” Three posters stood out from the bunch: “Introductory Psychology Activities Using Van Gogh as a Case Study”; “Predictors of Academic Procrastination in College Students”; and the dryly written yet riveting “Ethical Issues Involving Graduate Teaching Assistants.” A senior professor of my acquaintance saw me contemplating the “Ethical Issues” poster, and stage whispered “They should have called it ‘Can We Sleep Together?'” 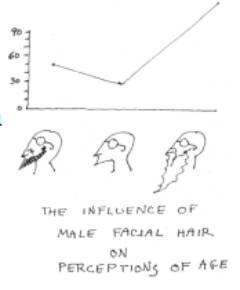 Simulating Boredom
Saturday afternoon, Carl. N. Perlotto, M. Lyn Hoefer, and N. Clayton Silver of the University of Nevada at Las Vegas presented their paper “The Ludic Love Style: Difference in Sexual Boredom”. My courage failed me, so I did not attend their session.

I did manage to drop in, later, on the final poster session of the day, and so was able to learn about “Age-Related Differences in the Attentional Blink.”

Odor Ordinance, Ungrateful Dread, and Exeunt
Sunday, the final day of the convention, was a whirl of brunches and business card swapping. I caught Cheryl L. Asmus and Paul Bell’s 9:00 a.m. talk on “Post-Implementation of an Odor Ordinance,” and then zipped through the convention’s final poster session. It was there that I encountered the inspirational “Depressed Individuals Show No Gratitude.”

At that point I had to rush off to the hotel, grab my bags, and cab it to the airport, tired, laden with notes and trinkets, but grateful for the chance to have seen so many remarkable “psychological wonders”.

This article is republished with permission from the September-October 1998 issue of the Annals of Improbable Research. You can purchase back issues of the magazine or subscribe to receive future issues, in printed or in ebook form. Or get a subscription for someone as a gift! Visit their website for more research that makes people LAUGH and then THINK.