“According to legend, the “pooka” or “púca” is a deft shape-shifter, capable of assuming a variety of terrifying or pleasing forms, and may appear as a horse, rabbit, goat, goblin, or dog. (See Footnote) [i]

The main characters in the film are a gentle, alcoholic bachelor named Elwood P. Dowd and his “invisible” best friend named Harvey. Harvey is a Pooka. He is an invisible 6’ 3” tall rabbit.

The two friends go everywhere together and carry on conversations in front of strangers, much to the dismay of the people they encounter who can’t “see” Harvey. Like most spirits, Harvey and his buddy Elwood are ridiculed and persecuted. 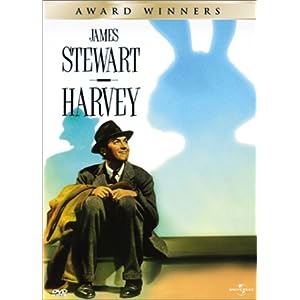 They think Elwood is “crazy” and decide to commit him to a psychiatric hospital so he can be “cured” of his “delusion” that he has an 6’ 3” tall rabbit friend.

Oddly and ironically, the word “psyche” mean spirit and “ology” means “to study”. Therefore, psyche-ology should be the “study of the spirit”.

Sadly, psychiatrists, and the military governments that pay them, do not study or acknowledge the existence of spirits. Their only interest is to “control” the “population”.

Therefore, they tell everyone that a human being is a body, and ONLY a body. They also tell everyone that their ability and awareness comes from their brain – which is a piece of meat inside the skull that conducts electrical messages from YOU, the spirit, to the rest of the body.

Now that you are living outside of a body, it is obvious that government psychiatry is a scam and a criminal activity. It has nothing to do with spirits, except to disable and destroy them.

In the movie, the “therapy” for Harvey’s buddy Elwood was to give him psychiatric pharmaceutical drugs which would make him come to his “senses” and make him “see reality”. “Seeing reality” means you are “cured” of your “delusions”, i.e. of having a friend like Harvey.

Fortunately, Harvey and Elwood were able to escape from the psychiatric drug pushers and lived happily ever after as best friends.

Unfortunately, millions of children and adults on Earth are not so lucky. In the US millions of kids are given Ritalin and millions of adults are given antidepressant drugs to help them “see reality”, i.e. become a mindless robot without any ability to imagine or create their own reality.

Of course, the reason these people are depressed to being with is because they have already seen too much of reality.”

[i]  Origins of the Pooka began a few thousand years back, the Pooka was originally a central European god known as the Boga, a nature god similar to the Greeks’ Pan.

Some etymologists claim that the Slavic word Bog was derived from Boga. Bog of course, is the Slavic name for the Almighty, and is the predecessor of the English word God.

It is one of the myriad of fairy folk, and, like many fairy folk, is both respected and feared by those who believe in it.   According to legend, the Púca is an adroit shape changer, capable of assuming a variety of terrifying forms. It may appear as an eagle or as a large black goat (its name is a cognate of the early

Irish ‘poc’, ‘a male goat’ and it lends its name to Puck, the goat-footed satyr made famous in Shakespeare’s A Midsummer Night’s Dream), but it most commonly takes the form of a sleek black horse with a flowing mane an glowing yellow eyes.  The Púca is considered by many to be the most terrifying of all the creatures of faery. Not the slightest reason is its appearance, but it is its powers that are most feared.

It is said to waylay travelers and others about at night, and if it is able to toss them onto its back, it will, at very least, provide them with the ride of their lives, from which they will return forever changed. A similar creature, the Aughisky  (Water-horse), will allow itself to be saddled and ridden, but if it is ever taken next to a river or pond, it will carry its hapless rider into the water and rip him to pieces.

The Púca has the power of human speech, and has been said to call those it feels have slighted or offended it out of their homes for a ride. If they fail to appear, it will tear down fences, scatter livestock, and create general mayhem.  Certain agricultural traditions surround the Púca. It is a creature associated with Samhain, the third Pagan (Celtic, Wiccan)

Harvest Festival, when the last of the crops is brought in. Anything remaining in the fields is considered “puka,” or fairy-blasted, and hence inedible. In some locales, reapers leave a small share of the crop, the “púca’s share,” to placate the hungry creature. Nonetheless, November Day (November 1) is the Púca’s day, and the one day of the year when it can be expected to behave civilly.  In some regions, the Púca is spoken of with considerably more respect than fear; if treated with due deference, it may actually be beneficial to those who encounter it. The Púca is a creature of the mountains and hills, and in those regions there are stories of it appearing on November Day and providing prophecies and warnings to those who consult it.

At the beginning of the 21st century, the Púca has succumbed to the disembowelment which has been the fate of so many other powerful mythological creatures. Contemporary media have reduced it to a harmless, shy, and slightly demented garden-gnomish weevil eater.